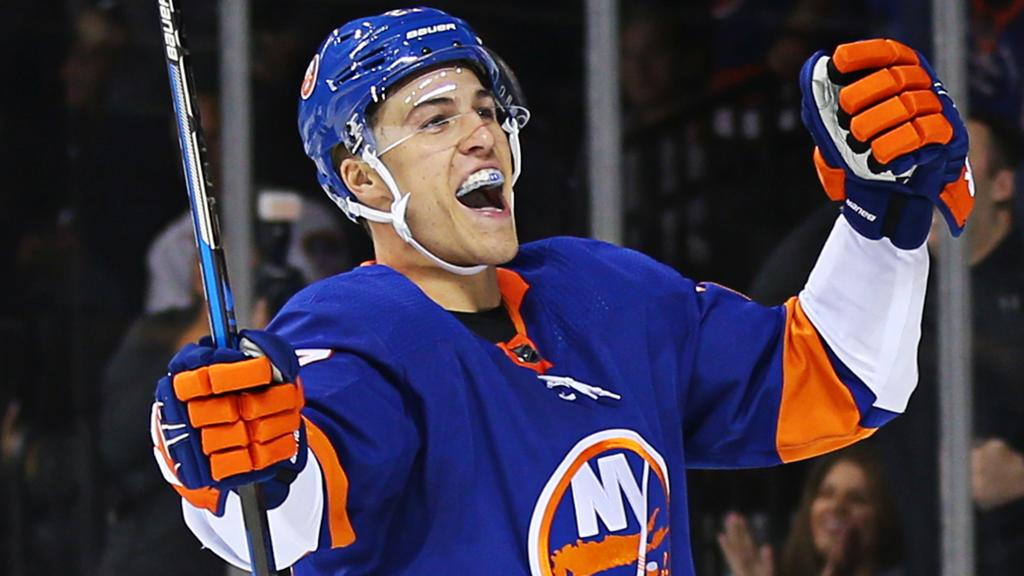 If you’re a New York Islanders fan, you probably are thinking that the Islanders have taken a step backwards from last season. After all, they lost their Vezina nominated goalie in Robin Lehner, the super bottom 6 producer Valteri Flippula, and the free agency contest to sign Russian superstar Artemi Panarin. That’s not great, especially considering that after the team’s season ended in a sweep against Carolina, the biggest need identified by coach Barry Trotz was for more offense. He was rewarded with an offseason of less offense, which technically is offensive.

I wrote about why that was offensive here:
https://worldwidesportsradio.com/lou-sers

But really, what’s worse for the Islanders is the fact that, based on the way this team is constructed, they are currently in “Win Now” mode. I’ll explain how that conclusion was reached shortly, but here’s a hint- it starts at forward. Check the link below to see the nightmare that two GM’s have created at forward.

The New York Islanders currently sit at just under $7 million under the salary cap, with a restricted free agent deal awaiting 28 point scorer Anthony Beauvilier. This means they’ll end the offseason somewhere around $4-5 million under the cap. Feel free to name an impact player that gets paid $4 million dollars in today’s NHL to swoop in and save the season. I’ll wait.

This in itself is a problem. But it’s not the primary problem. As pointed out by my buddy @AmazingInsights, time is our primary problem. Let’s look at who has the longest life on their NHL contracts with the Islanders. Anders Lee tops the list in both time and money. Now look at the age column. Anders Lee is 29. And a player starts a decline at what age? About 30 (https://www.fatherly.com/health-science/why-athletic-performance-declines-with-age/)

Next longest contract? Our favorite Beth, Brock Nelson. Nelson checks in at 27, so he is in his elite period of experience and performance. That got him a deal that runs until he’s 33, well into a decline. And anyone watching Nelson play over the years knows Nelson had a “contract year” last season and should expect a decline back to his lollygagging, streaky playing, and generally ineptitude this upcoming season.

Up next? Jordan Eberle. Ebs will turn 30 this year, with 4 more years after on his deal. Time is not on his side, either.

These are three of your key forwards. Thus, why I say win now. But let me beat the point in further, for the #IslesKoolAid out there.

Next up for term? Andrew Ladd. Already 33, already DONE. But with 4 more years at $5.5 million dollars. Untradeable, unless you throw in something significant like a first and second round pick, or a valuable prospect and a first. A wasted roster spot for a player that used to be good and play physical, but whose style of play has ground him down by 31. A year and change older than Anders Lee is now.

Then we get to the Josh Bailey deal. A Garth Snow gift to his favorite son to try to convince Tavares to stay on the Island- like THAT would do it- we see that Bailey at his age 29 season has $5 million cap hit until he is 34. Also, Bailey himself had a few break downs last season. He was on a 30 goal pace in November, but barely finished with only 16. He also lost 15 points from his prior season, but that was when he was bounced off of the first line this year for playing like shit. If he’s not riding coattails again? Ge ready for 14-21- 35 to return. You know, Bailey’s average pre-Tavares line stats.

Players turning 30 this year? Eberle and Bailey. Ladd is already there. This is 5/6ths of your top 6. This is 3 of your key forwards at 30 or more in October. This is 35% of the salary cap. This is win now.

And why now? Easy. How many productive forwards on the Islanders are under 28 (Nelson turns 28 in right after the season starts)? Definitely one, arguably two. The arguable one is Beauvilier, who has averaged 19 goals a year in the NHL. No assists, but goals, which IS the more important stat. Beau is due for a raise this year and will see a few million. But the definite one? Mathew Barzal. Barzal is due a raise after the season. Think he’ll get $5 million or more, considering what the RFA contracts of Connor McDavid, William Nylander, Austin Matthews, and the rest of the new crop of budding stars got paid?

What’s worse is the bottom six of the Islanders. Yes Matt Martin is in the final year of his deal and will give some cap relief based on what you should pay someone with that kind of production, but Leo Komorov is not. Nor is Cal Clutterbuck. Two more untradeable contracts without giving up assets, which is our next problem- where ARE the Islanders assets?

Generally, within 3-4 years of a draft, players emerge from those drafts into the league. For top 10 picks? It can be weeks after a draft. Let’s see how the Islanders have done in this range by looking at the 2015-2018 drafts.

The 2015 draft has been productive for the Islanders. Well, the first round anyway. Beauvilier made it to the NHL after one more season in juniors, where Barzal needed two. So, within 2 years all of the first round picks of the Islanders made the NHL. So that means the 2016 draft should have a player entering their sophomore year, right?

Wrong. The 2016 NHL draft has produced ZERO NHL games played for the franchise. ZERO. The expectation would be Keifer Bellows having 80 or so NHL games under his belt. Nope. Zip. And Anton Golyshev seems to enjoy Russia, so that’s another shitball.

The 2018 draft could be blossoming for the Islanders this year. Which is interesting because the Islanders will have 15 forwards and 7 defensemen already holding contracts. Some of those contracts are albatrosses and aren’t going anywhere, so those kids are generally dicked over. Like the fans. Or Cord’s neck. #DickedStraight

2012: Snow took 7 defensemen in that draft. You can argue that it was a deep draft for defensemen that year, which was true. You can argue that Griffin Reinhart got the pick that got them Mat Barzal.  You can also argue that with the 4th overall pick, the Islanders could have had Filip Forsberg, who was the 3rd highest forward drafted that year, was available when the Isles picked Reinhart, and was the first forward taken after 3rd overall pick Alex Galchunyuk.

2014: Two first round picks, including a top 5. These guys have both burned their entry level deals while COMBINING for under 90 games played in the NHL. Worth about the same output thus far as Alan Quine. Michael Dal Colle is officially a bust. I said this to my buddy Kool Aid Rob a couple of years ago and he called me crazy. Which is why he is Kool Aid Rob. Josh Ho Sang is on a one year two way deal, meaning that his career as an Islander is over July 1, 2020.

And for shits and giggles, the 2011 draft? Three forwards made it, but only one played more than 11 games. Ryan Strome was the 5th overall choice in the draft, had one good season with the Islanders, and eventually acquired Jordan Eberle. So at least Strome did something useful. He left. Buh-bye!

If you’re keeping score, from 2011 through RIGHT NOW the Isles have produced one impact forward by trading a 4th overall, and used a 5th overall to acquire another impact forward. I’m going to leave out 2010 when we used a top 5 pick to obtain Cal Clutterbuck – an impacted forward- but I guess I just didn’t. From 2011 to today, the Isles have produced at most two useful forwards from their system, and one from another one. That’s over an eight year span. Which included two top 5 picks, a top 4 pick, and 11 first round draft pick overall. Eight years. That’s longer than many NHL careers.

This is also drearily worse than I realized. The drafting of Garth Snow can be summed up in one word- Asshole.

Even if you have hope for Keifer Bellows, 73% of that first round is already in the NHL including everyone with offensive talent. And if you’re counting on the vaunted 2018 Islanders draft? Which of those 15 contracts will the Islanders jettison for Oliver Whalstrom? And Otto Koivula? Will he be as effective as Brady Tkachuk or Andrei Svechnikov from that same draft? Because they’re already producing in the NHL. Probably because they have offensive talent. Didn’t Derek Brassard just take Koivula’s job?

I’m going to give Simon Holmstrom a pass, because he’s at least a year away from the NHL. Which just compounds the lack of assets issue and reinforces the point of the win now mentality of this club, as its at least another year before a prospect is ready to help a win now team.

At least the defense is in good shape…kind of. Feel free to click on the link and go to the defense section.

The Islanders have 4 useful defenders under 28. But again, the salary cap nightmare rears it’s ugly head. After this season, Devon Toews and Ryan Pulock also need contracts. Those are definitely needs. But look at that top three, paywise. One guy under 30, Nick Leddy, but his deal will carry him right into his decline as it ends when he’s 31. The other two? Oh boy.

Thomas Hickey is on the wrong side of 30, and has 3 years to go on this deal- all what our science article would call a decline era. And Johnny Boychuk is already in decline yet has the highest paid contract on defense that lasts until he’s 38. Another unmovable contract…but at least you can ask for that 8 team list that you can try to send him to, as his absurd “no movement clause” is done.

The Islanders do have a defensive asset ready to step in, and with 4 younger defensemen it will make a solid core. Except…there’s 7 defensemen presently under contract, and the two with short terms are going to be resigned. What raise do you think Pulock will get? Toews? Because that’s cap space, too.

So who with a long term guaranteed contract sits down for Noah Dobson?

When the season gets rolling, the Islanders with the addition of Brassard will have 10 of 24 players on the squad including both goalies at or older than 30. They will have 3 more guys the season after turning 30. They will be a cap max team. And as we’ve seen no trades in the last almost 14 months (!), we can not assume help is coming. Besides, we have no young forward assets to offer in a trade, no one is taking many of these bad contracts written by the last and present GM’s, and where the team needs the most help? There are contracts cemented for 5/6’s of the top 6.

I wanted to remind you all here that the Islanders also do not have a single elite player. What team has won a Stanley Cup in the last 15 years without an elite player? They don’t have an elite player in their system, either. If they offer sheet Mitch Marner or Patrik Laine? Neither of those guys are elite players. Marner’s averaging 23 goals a season on his career, though to be fair it has increased every year. Laine has one dimension, although it is the best one to have, but 30 goals last season on a good team and he was still -24? Not elite.

Mathew Barzal? Not elite. Not even a top 20?

All of those long term deals, lack of prospects at forward, and complete lack of elite players tell us one thing: the Islanders are a defensive minded, win now team. Just without the horses to win now. The Drive for Five? It’ll have to wait another generation.

EDIT: The Islanders just signed Derek Brassard. 14 goals last year. Wrong side of 30. But this is a win now team, so I’m sure that’s the missing piece to the cup!