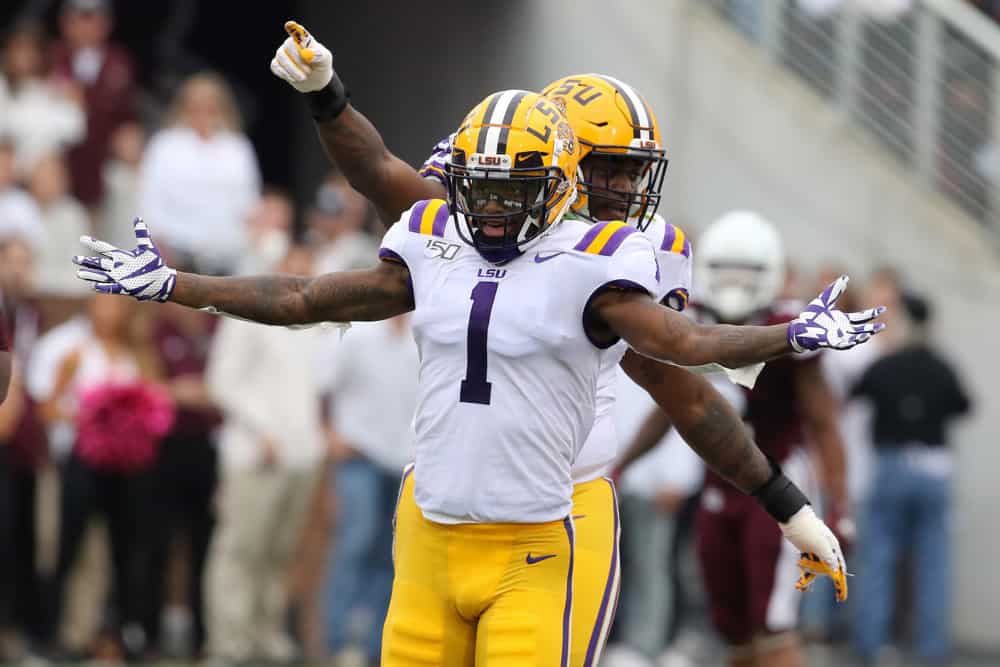 The father of the theory of evolution, Charles Darwin once said

“…Everyone takes a salutary pleasure in proving their falseness; and when this is done, one path towards error is closed, and the road to truth is often at the same time opened.”

Perhaps no one in college football faces evolving faster than SEC cornerbacks. While most discover that reality on the field, Kristian Fulton also learned the consequences of his actions in his personal life.

During mandatory drug testing following his Freshman season at LSU, Fulton worried his sample would show signs of marijuana. The NCAA suspended the 18-year old per their mandatory sentence of 730 days for tampering with a drug test by swapping urine samples. The irony? Fulton’s urine came back negative as the NCAA tested for performance-enhancing drugs only.

LSU Athletic Director Joe Alleva noticed Fulton’s desire to improve while accepting accountability. Fulton’s presence during training sessions, practice, team activities, class attendance, and GPA was exemplary. He began appreciating the advice of loved ones while avoiding those not out for his best interest. Whatever mental toughness previously possessed, grew in spades.

Alleva’s persistence appealing the length of the suspension (NCAA guidelines called for a one-year penalty for urine swapping) and vouching for his character, made a difference. Despite denying his initial appeal August 9, the NCAA reinstated him on August 23, a week before the start of the 2018 season. Fulton applied his approach during his final two seasons at LSU.

The NFL drafting process is distinctly harsher. Despite evolving into the 12th best prospect (according to Pro Football Focus) and second-best CB in the 2020 draft, Fulton fell to the second round. While the Tennessee Titans reap the rewards, here are three reasons why Fulton will make the rest of the NFL suffer consequences for not evolving as he did.

1. Something to prove – the athletes that have the proverbial “chip on their shoulder” are always hungry. Fulton understands the torment of failing to prepare. As he embarks on his rookie season, he will reap the life lessons learned in college.

2.  The scheme and numbers fit – Fulton possesses the size (6-0) and speed (4.46 40-yd dash) to succeed in the NFL, especially in Tennessee. Under Head Coach Mike Vrabel, the Titans feature a heavy-man based defensive scheme, in which Fulton should flourish. Fulton’s coverage grade and forced incompletion percentage finished among the best at his position. Fulton thrives in press coverage, as his 323 snaps his senior season ranked the third highest in college football.

3. Opportunity knocks – Due to the departure of Logan Ryan, LeShaun Sims, and Tramaine Brock, Fulton should start immediately. LSU’s history of cornerbacks (Patrick Peterson, Greedy Williams, Morris Claiborne, and Tre’Davious White) making a smooth transition into the NFL, also bodes well for the former Louisiana Defensive Player of the Year (2014 & 2015).

Fulton awaits the chance to prove his falseness to teams who overlooked him. While the NFL and their fans prepare for the strangest NFL season to date, the Titans Kristian Fulton knows tough times do not last, but tough people do.